Doing a 'virtual' carve up of a big document in Topicscape

From Topicscape
Revision as of 10:11, 30 May 2011 by imported>TSWikiSysop (→‎How to do it)
(diff) ← Older revision | Latest revision (diff) | Newer revision → (diff)
Jump to navigation Jump to search

There's a zip file that contains a Topicscape made as described below. You can download it from here: Oratory & Kennedy's inauguration then unzip this in your My Topicscapes folder and open it to see what's there.

To open it, find

\My Topicscapes\Oratory & Kennedy's inauguration\test.3DT in your My Topicscapes folder and double click it. Of course this assumes that you have already installed Topicscape.

This is an example of breaking up a document and organizing it visually in Topicscape, while retaining fully the integrity and editability of the document. The example is with a Word document about Pres. John F. Kennedy's inaugural speech based on a BBC web page.

How to do it

You might start by saving the document in the Home topic of a new Topicscape. But the document can actually be anywhere on your PC, and broken-down parts can be added to an existing Topicscape instead.

Then decide whether to make sub-topics for the main sections (good for short documents) or make the sub-topics one-by-one as you work through the document.

In the example case, we opened the Word document, and selected the first section - from the title down to the text just before the sub-heading and copied it to the clipboard (Ctrl+C or Edit>Copy). Then went to the Topic Centre of topic 'Background', right clicked and selected Paste Special from the menu that popped up. That gives us the chance to assign a new name, but we just accepted its suggestion "Background".

Then the Windows Paste Special panel appears and we select Paste Link and OK. 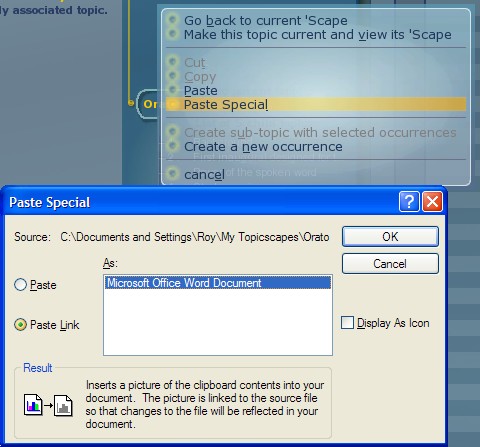 When done, you'll see that you have a new Occurrence in the Topic Center: a new RTF document. We'll look into this in a moment. You could select just Paste, but then the link to the original document will not be present, and any editing will happen on this extract only.

We repeated this for each section that follows, making occurrences in the appropriate sub-topic.

If you have downloaded our example, you'll see that in each case, Topicscape makes an RTF file (this can be opened by Word or Worpad) containing the section you pasted in, together with the source file's location.

And if you try to edit that, it will first ask if you want to update the document. Reply yes, and it will transfer control to the original document, and changes made will be in that and in the extract later when you have finished and save both files.

With complex documents, like large reports or spreadsheets, the complexity becomes manageable by breaking down and visualizing in the 3D landscape. That was done for a major consulting report, as described in this user story.

Not all software conforms to Microsoft's OLE requirements, but much does, including all of MS Office, naturally.