David is a consultant. Using 3D Topicscape, he planned and executed a major study for an NGO on discrimination legislation and its impact on insurance. 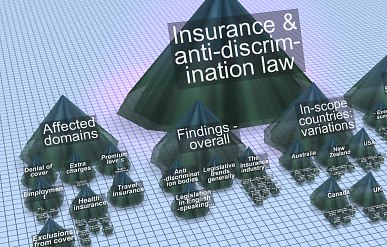 First, he analyzed the background, objectives and scope of the assignment and prepared a 3D "concept map" of the subject in 3D Topicscape (similar to a mind map). This acted as a framework for the information and references collected during the discovery phase of the project, and provided a working area for analysis. It gave support to the all-important creative phase when ideas and solutions were drawn up by allowing the Topicscape to be extended and modified as the material contained in it was searched and drawn upon.

For example, David wanted to refer to some US law text.

He "flies" to find the right area. 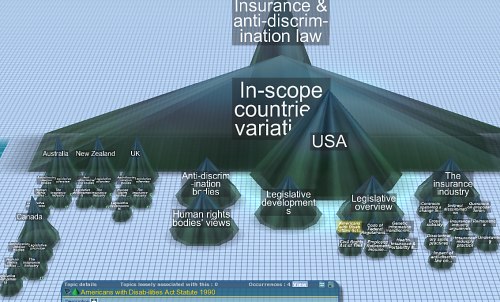 Then he centers the whole landscape around 'USA'. 3D Topicscape instantly calculates and redraws the new scene.

A double-click on the topic of interest takes him to the Topic Center where he finds four occurrences (files with added information). 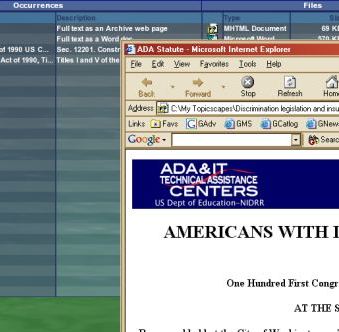 Another double-click and the reference that interests him is open on his screen. This particular reference brought to light significant differences in the US approach to discrimination in insurance so David immediately linked it in to the appropriate point in the report structure that was already forming as the project progressed and long before the detailed content of the report was written.

David used 3D Topicscape from the first stages of preparing a proposal for the project, right through to final delivery. He even used it to plan the structure of the report. And with consultants often having follow-on work that relates to past projects, it remained a valuable and well-organized source of reference. You need to use 3D Topicscape yourself to truly understand how it allows you to plan, organize and find reference material. Download Topicscape now, and have that experience yourself. Want more information first? You can go to our overview of 3D Topicscape.