The project manager in control

Janet is a project manager. In the early stages of planning and gathering material for a new assignment, she pulled it all together in a 3D project mind map, using Topicscape's intuitive landscapes. 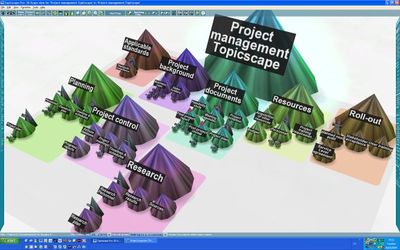 She built a master Topicscape to help her organize all the materials for each project that she manages. She keeps a blank copy of this as a template and makes a new copy at the beginning of each project. This becomes her project repository: The basis for all her planning, accumulation of project documents, actions on the project and work, through to final project review. 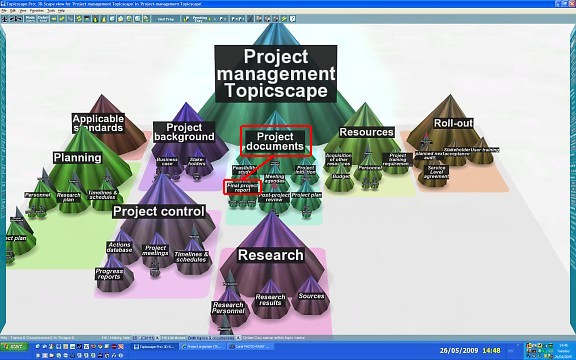 As she approached the end of one project, she was reviewing lessons learned and preparing the final project report. She realized that although standards compliance had been under watch throughout the project, she had nowhere to record the findings in her Topicscape. "Project documents" was the topic she chose to cover this area. 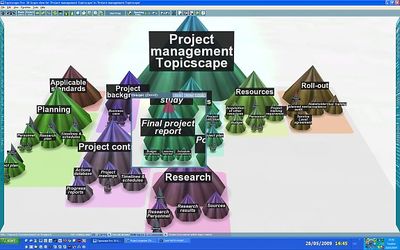 She placed the cursor near that and pressed Ctrl+E. The Enlarger popped up and showed her the "Final project report" topic. She could also have flown towards this, or used Quickzoom which is faster and easier, but a dynamic zoom is hard to show here. 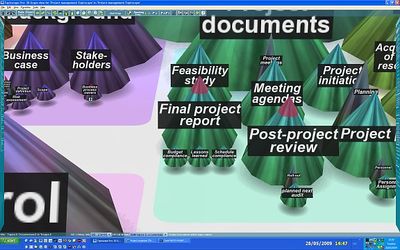 A double-click on the Enlarger snaps to the magnified view and she can see the child topics "Budget compliance", "Lessons learned", "Schedule compliance" but nothing relating to standards compliance. (The image on her screen is much clearer than these compressed web-site images). 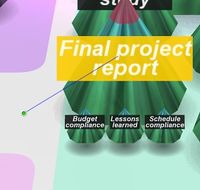 She clicks on "Final project report". A green dot appears. She clicks again and drags that green dot to the field and releases it. 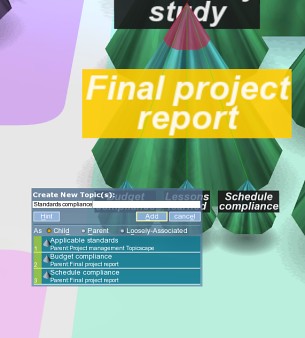 She keys in "Standards compliance" and presses Enter. A table of hints appears - names of existing topics with similarities to the new one. The purpose of this is mainly to warn a user that they may be making a new topic where a suitable one already exists, but Janet is reminded that there is a topic "Applicable standards" that should be linked to "Standards compliance" later. For now, . . . 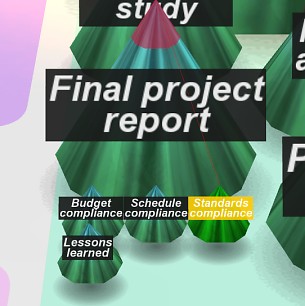 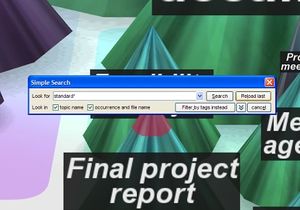 To find the topic for the link she noticed earlier, Janet keys "standard*". Topicscape immediately opens its search panel. She presses Enter and the search is done.

The results appear in the 3D Hit list. (There is a 2D alternative - a swinging panel that appears from the left). She drags a green dot from one entry to another and a menu pops up to allow her to choose the type of relationship. She makes a choice: "Standards compliance to be a child of Applicable standards". 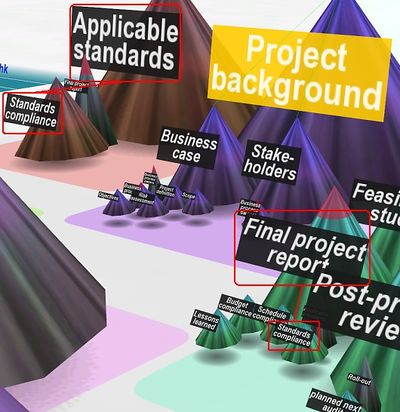 Back in the 'Scape she finds that "Standards compliance" now appears as a child of both "Final project report" and "Applicable standards". It's the same topic - anything she does to one instance of the topic appears in the other location as well. As she starts to write up the Standards compliance section of her project report, she has somewhere to locate the documents being returned by project members and by the Quality Assurance team, and she has immediate access to information on the standards that should have been followed.

Janet used 3D Topicscape throughout the project life-cycle and found it motivated her to plan and organize, increased her confidence that she could find all the project materials when called on, and reduced the stress of managing a complex operation. You need to use 3D Topicscape yourself to truly understand how it allows you to plan, marshal resources and put your finger on the thing you want, when you want it.

Download Topicscape now, and have that experience yourself. Want more information first? You can go to our overview of 3D Topicscape.